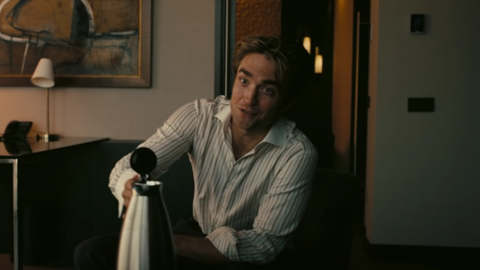 The Batman actor Robert Pattinson has further discussed his love of Final Fantasy VII, and specifically the two characters Aeris and Tifa. In an interview promoting The Batman, Pattinson discussed the love triangle and how it affected him. His co-star Zoe Kravitz was in the interview, too, and she was far less enthusiastic.

“I was in love with Aeris, and Tifa. It’s a love triangle where Aeris, or Aerith depending on what version of the game you have…she’s like the really kind girl who has super powers to heal everyone and make the world a better place. And then Tifa is this sexy little thing who’s like a thief and starts to wear a short skirt,” Pattinson said to Clique X. “And you’re like, ‘I can’t decide!’ And then Aeris, right at her peak, gets killed. This is how every guy figures out what love is…”

Kravitz, who plays Catwoman next to Pattinson’s Batman in the upcoming film, chimed in to reply, “Either the one that’s going to heal everything and the one in the short skirt? These are the options?! Oh my god. This is the problem with the world.”

In 2020 when Pattinson was making the rounds to promote Tenet, he told GameSpot that Final Fantasy VII was his favorite game, and it made him cry. “Mine, I think it’s a lot people’s favorite game–Final Fantasy VII. Probably one of the only times I’ve cried in my life was when Aerith dies. My first love,” he said.

Final Fantasy VII was originally released in 1997 and the first part of the modern remake was released in 2020, scoring a rare 10/10 here at GameSpot.

As for The Batman, it comes to theaters this Friday, March 3. Keep checking back with GameSpot for lots more.

Are Developers or Publishers More Important in How You Choose Games?