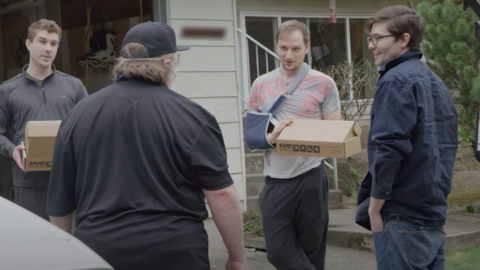 Valve’s Steam Deck console is out now, and some of the first units were personally delivered by none other than Valve founder and billionaire Gabe Newell. In a fun little video, we get to see Newell walking through neighborhoods near Valve’s headquarters in Bellevue, Washington, hand-delivering units to fans.

Some people are excited, some are confused, and some didn’t seem to recognize him at all. “Hi, I’m Gabe Newell. I’m just wandering around your neighborhood,” Newell says in the video.

Newell delivered newspapers and telegrams for Western Union when he was younger, so he’s got experience going door-to-door with packages in this way.

A common theme in the video is Newell asking people to share their honest opinions with him and Valve about Steam Deck. He gives out his work email to anyone who wants it, and says he reads every email he receives because that’s a good way to connect with fans and stay grounded. “I get anywhere from several hundred to several thousand emails a day. I read them all. And that keeps you super grounded. You know what people are actually thinking; what’s actually important to them,” he said.

Also of note here is that Newell signed the Steam Decks he delivered, so they will indeed become very unique and rare collector’s items.

For more on the Steam Deck, check out GameSpot’s Steam Deck review. “What the Steam Deck excels at is being a mobile hub for your Steam games, giving you enough to work with to get the best out of a selection of games you can’t go without while away from your desktop. In that regard, there simply is nothing better on the market right now,” reviewer Alessandro Barbosa said.

Kayvon Thibodeaux to debut for Giants against Cowboys in MNF showdown