During his first year in office, President Joe Biden tried and failed to get Sen. Joe Manchin (D–W.Va.) and other moderate Democrats in the Senate on board with his expensive domestic agenda.

In Year Two, Biden is promising to market that agenda in a way that seems carefully calibrated to appeal to the objections Manchin had raised about how Biden’s plans would add to America’s record-high national debt and trillion-dollar annual deficit.

“My plan will not only lower costs to give families a fair shot; it will lower the deficit,” Biden said during Tuesday’s State of the Union address.

A fine thesis—a welcome one, even—but Biden declined to fill in many details about how he intends to do that. The only specific plan announced on Tuesday was a new office within the Department of Justice to investigate and prosecute waste, fraud, and abuse within the pandemic relief bills passed over the past two years—bills that, in fairness, were wracked by waste, fraud, and abuse.

Other than that, Biden’s domestic agenda sounds about the same as it did last year: Protectionist “Buy American” provisions, a bigger social safety net including tax credits for parents, and a crackdown on the businesses that Democrats increasingly (and bizarrely) are trying to scapegoat for runaway inflation.

Going after waste is laudable, of course, if perhaps two years too late. But the fundamental drivers of the federal budget deficit are a structural disconnect between spending and revenue and unstable long-term costs in entitlement programs. A promise to reduce the deficit that doesn’t address those two things isn’t a serious plan.

Biden’s plan doesn’t appear to be a serious plan.

As he made clear a few moments later, promising that “by the end of this year, the deficit will be down to less than half what it was before I took office,” and following up by claiming that he would be “the only president ever to cut the deficit by more than one trillion dollars in a single year.”

That’s a clever little game. Thanks to pandemic spending, the federal budget deficit ballooned to over $3 trillion during 2020 and rang in at $2.8 trillion last year. As the pandemic passes and all that emergency spending comes off the books, the deficit is projected to fall to about $1.1 trillion this year before leveling off and then rising again: 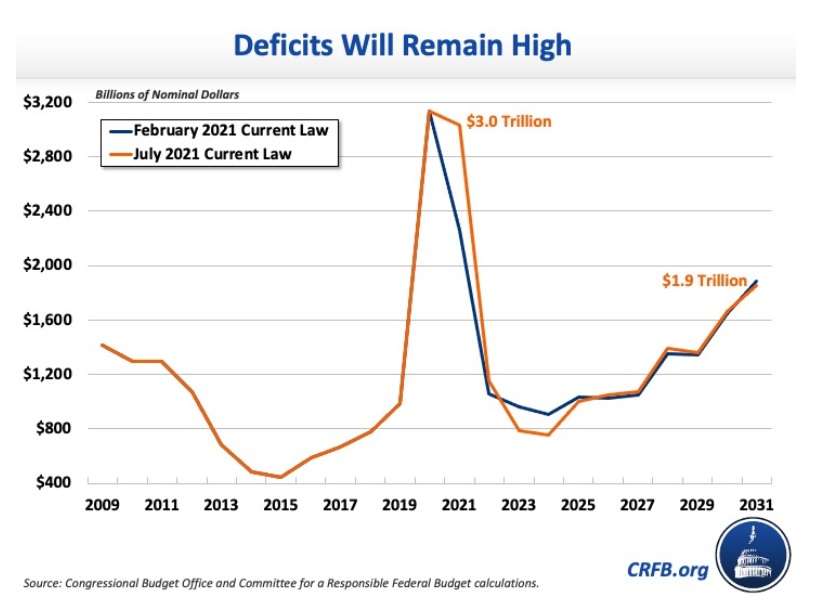 That decline is not the result of anything Biden is proposing to do—and it doesn’t mean that the underlying problems with the federal budget have been addressed.

Biden is setting the lowest possible goal for deficit reduction, setting himself up to take credit for achieving it, and hoping that’s enough to convince moderate Democrats to vote for more spending.

Because that’s absolutely the other shoe here. Biden’s “Build Back Better” plan died in the Senate last year because Manchin and other moderate Democrats refused to vote for more spending. Manchin was very explicit about this: “This is a recipe for an economic crisis,” he said of Biden’s plan in November.

Even after the White House tried to reconfigure the package to hide half its actual cost, Manchin correctly derided it for being full of “shell games” and “budget gimmicks.”

So Biden is promising to change the shells and announce new gimmicks, this time gift-wrapped specifically for Manchin. But this isn’t deficit reduction; it’s just more of the same.