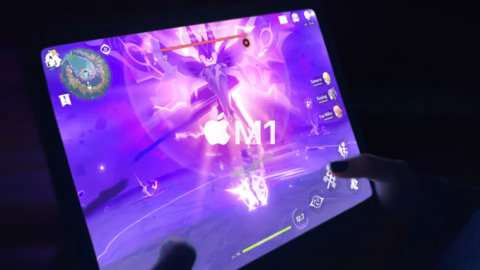 Apple announced a new, souped-up iPad Air this week, and featured mobile game Genshin Impact pretty heavily in its advertising for the new device. Eagle-eyed Genshin fans soon noticed something wrong with how the game was being played in Apple’s ad, however, with the video showing a player doing absolutely no damage to one of the game’s more punishing boss.

Around 15 seconds into the new iPad Air ad, a player on the device is shown facing Genshin Impact’s powerful Thunder Manifestation boss, but instead of the big damage numbers Genshin players usually aim for, the game instead shows a bunch of greyed-out “immune” tags. In the ad, the player is using Raiden Shogun’s Musou Isshin, usually a powerful electro-infused attack–unless you happen to be facing a boss who’s immune to all electro attacks.

On closer inspection, the player has two other electro-wielding characters equipped–Yae Miko and Keqing–while the fourth character is the Traveller, who has the potential to also wield electro attacks. All up, Apple’s Genshin player is in for an incredibly difficult boss battle.

While it’s clear Apple made the aesthetic decision to feature both an electro boss and electro attacks to follow the purple color scheme featured in this part of the ad, the obvious “immune” tags just look silly to anyone who’s played a bit of Genshin. Next time, try and give us a big juicy crit, Apple.

Every Google Stadia Exclusive That Could Disappear Soon

The Iranian Poet Who Became an American Action Painter