The US urged the UK and the EU on Friday to reach a compromise on Northern Ireland’s post-Brexit trading arrangements after Boris Johnson threatened to tear up the agreement between the two sides.

The British prime minister said during a trade mission to India that his government was willing to take unilateral steps to reform the Brexit deal, which has bedevilled UK-EU relations since taking effect.

Asked whether he was prepared to legislate to give British ministers powers to neuter elements of the so-called Northern Ireland protocol in UK law — as first reported by the Financial Times — Johnson said: “Of course. That goes without saying.”

Johnson’s stance came despite warnings from the European Commission and the opposition Labour party that taking unilateral action would put the UK in breach of international law.

Washington urged the UK and EU to continue talks to resolve challenges around implementing the protocol. The US state department said America’s priority was to protect the “gains” of the Good Friday peace agreement.

The best path forward is a pragmatic one that requires courage, co-operation, and leadership

“We recognise that there have been challenges over the implementation of the Northern Ireland protocol and that talks between the UK and EU to resolve these continue,” said a state department spokesperson.

“The best path forward is a pragmatic one that requires courage, co-operation, and leadership.”

The spokesperson added that Washington was urging all sides to “continue engaging in dialogue to resolve differences and bring negotiations to a successful conclusion”.

Asked about the protocol this week, a commission spokesman said it was “important to underline” that the Brexit deal which Johnson negotiated in 2019 created “legal obligations to which the UK is bound as much as we are”.

EU diplomats have also warned it would be “utterly irresponsible” for the UK to be seen to be flouting international law at a time when Europe was trying to present a united front against Russia following its invasion of Ukraine.

While Johnson said the UK still wanted to resolve outstanding issues over the protocol on a bilateral basis with the EU, officials on both sides stated that talks to resolve differences over implementation have stalled.

The agreement leaves Northern Ireland following EU rules for goods trade and creates a customs border in the Irish Sea which the British government and all the region’s pro-UK Unionist parties say is “unsustainable”. Some businesses have also complained that the protocol has introduced unnecessary bureaucracy. 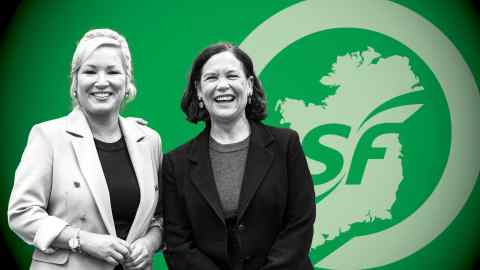 In a sign of how far apart Brussels and London are, the EU’s chief Brexit negotiator Maros Sefcovic wrote to his British counterpart Liz Truss last month complaining the UK was still not providing adequate access to customs data, in a letter seen by the FT.

The news that the UK government was preparing legislation that would give ministers powers to “switch off” parts of the protocol has emerged ahead of elections to the Northern Ireland assembly on May 5.

The plan drew an angry reaction from the nationalist Sinn Féin party, which could emerge as the largest group in the assembly for the first time.

“These senseless acts by the British government are completely out of touch with the majority of people in the north who support the protocol and realise that it is here to stay,” said a Sinn Féin spokesperson.

Sir Jeffrey Donaldson, leader of the Democratic Unionist party, currently the largest group in the Stormont assembly, said the DUP had made clear it wants the issues around the protocol to be resolved before it will agree to return to power-sharing in the region’s executive.

“The protocol is not supported by unionists and it needs to be replaced with arrangements that respect Northern Ireland’s place in the UK”, he added.

Doug Beattie, leader of the Ulster Unionist party, said changes were needed “and if the [UK] government is going to do something, they should just do it”.

“Businesses need pragmatic and sustainable solutions — and crucially they must be legal,” he said.