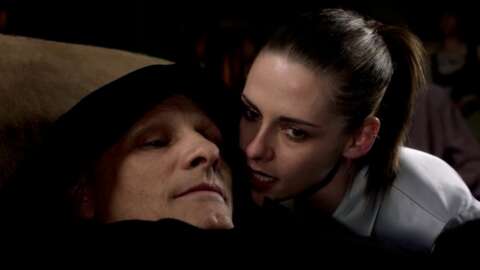 Film distributor Neon has released a red band trailer for Crimes of the Future, the upcoming horror film from iconic writer-director David Cronenberg. Although the film shares a name with an early experimental short that Cronenberg made back in 1970, it is unrelated to this upcoming release.

A synopsis reads as follows: “As the human species adapts to a synthetic environment, the body undergoes new transformations and mutations. With his partner Caprice (Léa Seydoux), Saul Tenser (Viggo Mortensen), celebrity performance artist, publicly showcases the metamorphosis of his organs in avant-garde performances. Timlin (Kristen Stewart), an investigator from the National Organ Registry, obsessively tracks their movements, which is when a mysterious group is revealed… Their mission–to use Saul’s notoriety to shed light on the next phase of human evolution.” Check out the trailer below, but be warned, there’s no shortage of body horror.

Crimes of the Future also reunites Cronenberg with Viggo Mortensen, who starred in the director’s movies A History of Violence, Eastern Promises, and A Dangerous Method.

Cronenberg’s long career in horror and sci-fi includes classics such as The Fly, Scanners, Videodrome, and The Dead Zone. Crimes of the Future will be his first movie since 2014’s Map to the Stars. Most recently, Cronenberg has been working in front of the camera. He is reprising his role as the mysterious Kovich in appeared in Star Trek Discovery Season 4. The character was first introduced in the show’s third season.

Crimes of the Future is due for a June 3 release.

Tower of Fantasy is perfect for recreating Genshin Impact characters

Why Am I Dizzy? A Key Cause and a Simple Solution