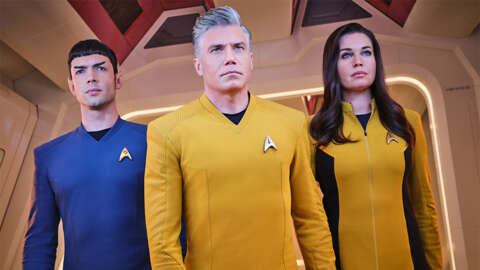 When inventing history in a science fiction tale, using real-world archival footage can be an easy way to both make the story relatable and on a scale that would be unreasonable to film yourself. Star Trek: Strange New Worlds’ premiere episode has done exactly that, but with the strange choice to use footage from Ukranian protests to help tell the story of an alien planet’s civil unrest (via Gizmodo).

The debut episode, “Strange New Worlds,” takes Captain Pike and his crew to Kiley 279, home to a pre-warp civilization in conflict. The civilization is embroiled in unrest, and the Enterprise crew spots a news broadcast about the protests. To simulate the conflict, though, the showrunners used footage from Ukrainian protests that took place in 2013 and 2014, called the Euromaidan or Maidan Uprising. Protests occurred across the nation, though this one, in particular, took place in Ukraine’s capital of Kyiv. As Gizmodo notes, these protests would eventually climax in a clash between civilians and police that would take the lives of over 100 protesters.

The episode uses other archival footage as well–footage from the January 6 insurrection at the United States capitol is used to discuss America’s second Civil War and World War III. Additionally, the Ukrainian footage in particular is described in the episode as showing “seditious elements” in the alien government, implying that the protesters, in this case, were traitors to the nation rather than scared and angry citizens.

It’s not new for a Star Trek show to be political–they have been since the very beginning. It’s also nothing new for a show to use real-world footage for something like this. Considering the current state of things in Ukraine, though, where Russian forces have been pushing into the country for well over a month, the timing and choice of the footage make for a particularly bad look for the show.