The True Story Behind Hulu’s “Candy” 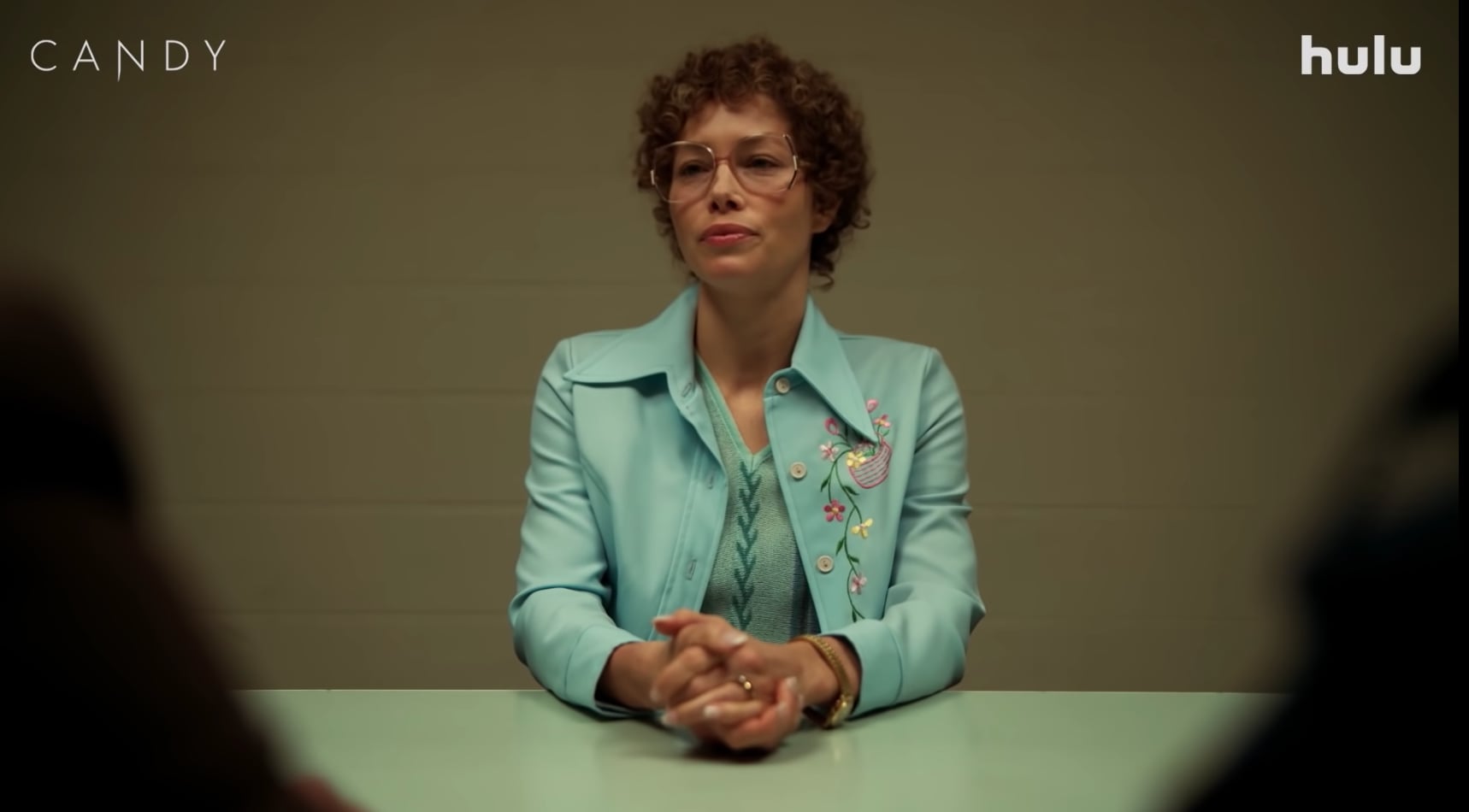 Jessica Biel is hardly recognizable in the Hulu series “Candy,” which hit the streamer on May 9. The highly anticipated series is based on the true story of Candy Montgomery, a housewife who killed her friend Betty Gore in 1980. The limited series will star Biel as Candy Montgomery, Melanie Lynskey as Betty Gore, and Pablo Schreiber as Allan Gore, Betty’s family-oriented, church-going husband with a heavy secret.

The case of Betty Gore is a perplexing one, filled with unbelievable details that remain shocking 40 years after the killing took place. Ahead of the series premiere, here is the incredible true story behind “Candy.”

How Did Betty Gore and Candy Montgomery Become Friends?

According to Texas Monthly‘s “Love and Death in Silicon Prairie,” a series of pieces pulled from the book “Evidence of Love,” which featured exclusive interviews with the Gore and Montgomery families, Candy and Betty met in 1977 while attending the Methodist Church of Lucas in their town of Wylie, TX. They were both devoted mothers and loving wives to their husbands, Pat Montgomery and Allan Gore. Candy, in particular, took to the church, finding purpose in both worshiping there and being involved in church-oriented activities, such as volleyball and choir. As she became more involved, she became close with Betty and developed a curiosity turned crush on her friend’s husband, Allan.

How Did Candy Montgomery and Allan Gore’s Affair Start?

While Candy appeared to have the cookie-cutter, perfect life on the outside, on the inside, she was completely bored in her marriage and sought to experience some kind of excitement, liberation, and freedom outside of the mundane relationship with her husband, Pat. She grew fond of Allan as the two spent time together at church. To Candy, Allan was everything her husband was not: engaged, sociable, and dedicated to the church.

By 1978, Candy was 28 years old and fraught with the thought of having a passionate affair with Allan. The two started innocently flirting during church gatherings and activities. For Candy, these small signs were indicative of something much more, which she was determined to pursue.

Following a church choir practice, Candy revealed her feelings to Allan, who she hoped would reciprocate. “I’m very attracted to you and I’m tired of thinking about it and so I wanted to tell you,” she told him (via Texas Monthly). When a stunned Allan failed to respond immediately, she got out of his car and hurried to her car. Candy’s confession left an impact on Allan, who, at that time, also felt trapped in a lifeless, dwindling sex life with Betty. Allan loved his wife dearly and felt as if he also needed some kind of spark in his life but was unsure if he could fully commit to an affair that had the potential to ruin his life.

Nonetheless, Allan reached out to Candy about a week later after a church volleyball game. When discussing the possibility of an affair while sitting in Candy’s car, Allan initially shut down the idea, telling Candy, “I don’t think I could, Candy. I don’t think it would be a wise thing to do, because I love Betty,” according to Texas Monthly. Candy insisted their relationship would be strictly sexual and would not involve romantic feelings of any sort. Despite his initial reluctance, Allan kissed her and left.

For weeks, the two debated starting a full-fledged affair. Above all else, Allan was hesitant to see Candy because he didn’t want to fall in love and ultimately dissolve his marriage, which she also agreed on. After much consideration, which included a list of rules ranging from who pays for their motel and lunch dates to specific days they could meet, Candy and Allan began their affair on Dec. 12, 1978, at the Continental Inn, according to People. The two would continue their affair at the Como Motel for the next four months, meeting during Allan’s lunch breaks.

How Did Candy Montgomery and Allan Gore’s Affair End?

As Candy and Allan’s affair was in full swing, Betty had a baby girl named Bethany in July 1979, which disrupted the pair’s routine meetings at the Como. Despite their initial intention to be just friends with benefits, Candy started to develop feelings for Allan. Meanwhile, Betty, who was fearful of being left alone, deserved more time with her husband. During this time, the pair’s clandestine meetings were less frequent and they debated ending the affair, though neither could commit to a decision, according to Texas Monthly.

Despite Allan’s efforts to be more present, Betty recognized a change in her husband and started developing high blood pressure, aches and pains in her body, and feelings of depression, which were treated by doctors with painkillers. At this point, Allan made the decision for him and Betty to attend Marriage Encounter, a church-sponsored retreat that focused on solving marital problems and strengthening marriage commitments, which was incredibly successful for the Gores. Shortly after, Allan ended his and Candy’s affair.

How Was Betty Gore Killed?

With their affair in the past, Candy and Allan went on with their lives and tried to forget about their passionate, months-long affair, but everything changed on June 13, 1980. When Allan, who was on a business trip in Minnesota, tried to get in touch with Betty that night, she didn’t answer the phone. After several repeated attempts, Allan enlisted the help of several neighbors — Richard Parker, Jerry McMahan, and Lester Gayler — to check on his wife, as reported by Texas Monthly. The three were able to enter the Gores’ home through an unlocked door and discovered baby Bethany crying uncontrollably and Betty nowhere in sight. After searching through the home, they discovered Betty’s bloody, mutilated body in the home’s utility room.

How Did Candy Montgomery Get Caught?

When Allan called Candy in a panicked search for Betty, Candy told him she saw Betty that morning when she picked up Alisa Gore’s swimsuit for a play date with her children. She told Allan that Betty appeared normal but did seem in a hurry to get her out of the house. Following several phone calls with Candy, Allan’s neighbors told him of the gruesome discovery that his beloved wife was dead.

Candy, who was the last person to see Betty alive, was quickly labeled as the prime suspect in the killing. While she maintained a convincing story to police, authorities zeroed in on her involvement in the crime after Allan confessed to their affair. Candy was arrested for Betty’s murder on June 27, 1980, according to The Independent.

During her criminal trial, Candy enlisted the help of lawyer Don Crowder and psychiatrist Dr. Fred Fason to defend her case. Through hypnotizing Candy, Dr. Fason was able to extract key details of Betty’s death, which Candy had not revealed to police during questioning. Candy claimed that on the day of June 13, 1980, she went to Betty’s home to retrieve Alisa’s swimsuit, at which time Betty confronted her about having an affair with Allan. When Candy confirmed the affair, Betty, angered, got a three-foot axe and threatened her to never see her husband again. Candy argued that she tried to leave the house, but Betty continued to pursue her. The two physically struggled in the utility room, and when Candy gained control of the axe, she hit Betty in the head with it. Despite the strong hit, Betty was still alive, but an enraged Candy killed her, striking her 41 times with the axe.

After the trial’s closing arguments, the jury reached a verdict in one afternoon, finding Candy not guilty of the murder of Betty. As of 2022, she is allegedly living in Georgia under her maiden name, Candace Wheeler, and is working as a therapist for teens and adults, per The Daily Mail.

Catch “Candy” on Hulu on May 9, and watch the official trailer below.

THE HIGH REPUBLIC Series Set To Release This November — GeekTyrant