While this year’s edition of Frieze New York may have drawn crowds to The Shed on Wednesday, Phillips joined the action staging an evening sale dedicated to 20th century and contemporary art that brought in a collective $226 million—marking the largest total in the company’s history.

Of the 36 works offered, 9 lots, including those by Pablo Picasso, Jean-Michel Basquiat and Cecily Brown, were backed by the auction house with third party guarantees. By the end of the two-hour sale led by auctioneer Henry Highley, Phillips London-based head of private sales, all lots were sold. One work by Jonas Wood was withdrawn before the sale began. 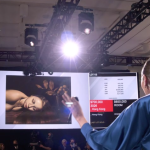 Attending the auction in person were some of the market’s formidable advisors — among them Bill Acquavella, Amy Cappellazzo, Adam Chinn, David Nahmad and Gabby Palmieri.

“We saw the best of Phillips,” the auction house’s newly-appointed CEO Stephen Brooks said in a press conference following the sale.

Robert Manley, Phillips deputy chairman, added that some consignors felt so confident in the market’s current strength they chose to forego the auction house’s offering of financial backing,

“It was astonishing. Most people didn’t want guarantees,” he said.

Anchoring the sale was Jean-Michel Basquiat’s 1982 painting Untitled (Devil), sold by Japanese multi-millionaire Yusaku Maezawa, who parted with the prized work just six years after purchasing it at Christie’s for $57.3 million.

Offered in the sale with a guarantee, after ringing in bids from four specialists, the piece sold on a hammer bid of $75 million. That mark was above the $70 million estimate going to an Asian bidder on the phone with Meiling Lee, a modern and contemporary specialist in Taipei, for a final price of $85 million with fees.

‘The market has responded positively and the rest of the industry has followed us,” Phillips Americas president Jean-Paul Engelen said of the house’s move in 2015 to merge art historical periods during its evening sales.

14 of the sale’s lots were by women artists. Records were set for Yayoi Kusama and Robin F. Williams.

The result marks a breakthrough for the third largest international auction house, which competes against Sotheby’s and Christie’s for select consignments. The Basquiat is now the most expensive lot that the house has ever sold. The price surpassed the $63 million benchmark set at Phillips in 2010 when Andy Warhol’s 1963 canvas Men in Her Life sold during a New York evening sale.

A bidder on the phone with Engelen prevailed over another determined client in the room for a mobile sculpture by Alexander Calder. The work sold for a final price of $13.3 million, surpassing its $10 million estimate.

Cecily Brown’s 2005 abstracted canvas Angie, which features an amalgam of hidden figures in red, blue and green hues, hammered for $4.9 million to a bidder on the phone with Phillips Americas chairman David Norman. That price was shy of the British painter’s auction record of $6.8 million achieved at Sotheby’s New York in May 2018.

Elsewhere in the sale, Yayoi Kusama’s 1959 monochrome white canvas Untitled (Nets), deriving from a series that has achieved the artist’s highest prices, sold for a record $10.5 million, double the $5 million low estimate.

Female artists with ascending markets starred in the sale. Anna Weyant’s Buffet II (2021), a sleek still life scene that riffs on old master vanitas paintings hammered at $580,000, five times the $100,000 estimate and going to a bidder on the phone with a Phillips Hong Kong specialist. On the heels of Gagosian’s representation of Weyant that the mega-dealer announced earlier this month, the market for the 27-year-old artist is on the rise. The price at Phillips came shy of the current auction record of $1.5 million for her 2020 canvas Summertime, which sold at Christie’s last week.

Hilary Pecis’s meticulous interior scene Adrianne’s Bookshelf (2020) hammered with a bidder in the room at the high estimate of $500,000, for a final price of $630,000, more than double the low $300,000 estimate. Bidders registered in Hong Kong, Korea, and New York competed for Shara Hughes’ painting The Not Not Dark Spots (2017), which depicts a sun-reflected body of water wading up to a red-sanded shoreline. The work hammered for $1.3 million, against an estimate of $300,000, going to a bidder on the phone with a Phillips New York contemporary art specialist for $1.6 million with fees.

A bidder on the phone with Englen triumphed over another calling in with Phillips deputy chairman Meity Heiden to win Yves Klein’s 1961 monochrome blue canvas Relief Éponge bleu sans titre (RE 49). The work hammered on a bid of $17.1 million, well surpassing the $14 million low estimate and going for a final price of $20 million.

Performances in tonight’s sale for works by Klein, Basquiat and Calder, Manley noted, proved demand for blue-chip works to be stable despite shaky conditions in other financial markets.

“The two markets aren’t necessarily in lockstep,” Manley said, noting that the evening’s robust 48 percent return on the Basquiat amid a Dow drop of over 1,000 points might signal a “flee to tangibles” for investors.

Why Magenta Plains Doubled Down on Chinatown Amid a LES Exodus – ARTnews.com

An Enormous ‘E.coli’ Floats Through the National Museum of Scotland at 5 Million Times Its Actual Size