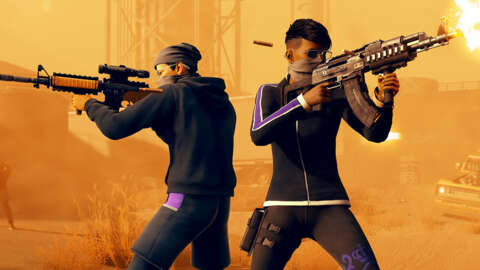 Developer Volition showed off 40 minutes of new Saints Row IV gameplay at a recent hands-off preview. This game is a reboot of the open-world franchise that hasn’t released a mainline entry since 2013’s Saints Row IV. The game takes place in a brand-new setting: the southwest United States-Inspired Santo lleso. You play as a former member of a private military corporation organization called Marshall Defense Industries. In a familiar fashion to the series you and a group of characters–including a talented driver and a wannabe business entrepreneur–form your own crew called the Saints in order to fight your way to the top.

This Saint’s Row steps back from outlandish sci-fi settings and focuses on a more grounded story. Unfortunately, that has seemingly translated into a by-the-numbers open-world crime game with a series of predictable loops. You go to your gang’s hideout, figure out what you want to do next, jump in your car, drive to a point on your map, complete the mission, and return to base to pick the next mission. The world doesn’t seem to react to you–beyond the cops attacking you if you draw too much heat–and the game features the same handful of missions that the Saints Row games have always had like “cause a certain amount of damage in a limited time” or “fly to the bad guys’ base and blow it up” or “save your friend before time runs out.” You never actually need to understand the lay of the land or take note of the scenery because the world is one of destinations to go to and boxes to check. If it wasn’t for the graphics, this new Saints Row would seem like a game I had played almost 10 years ago.

Combat seems like it could be pretty fun, as it mixes in unorthodox weapons alongside more traditional firearms. There’s nothing quite as extravagant as what was seen in Saints Row: The Third and Saints Row IV, but there are a few cool toys like a device that allows you to shoot through walls and a football that latches onto enemies and sends them flying into the air. But I’m worried that combat could get stale after a while. I watched what combat looked like against both the Los Panteros and the Idols and it seemed like the same run-and-gun strategy worked for both gangs, despite their members being quite visually different.

Saints Row is now scheduled to release later this year, launching for Xbox Series X|S, Xbox One, PS5, PS4, and PC on August 23.

Why Dune 3 Is Even More Important Than Part 2