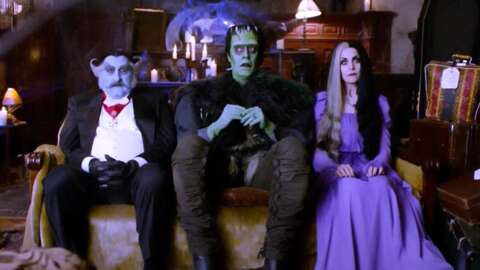 The Munsters doesn’t have a release date yet, but it’s been rumored that the movie might end up as a Peacock streaming exclusive. Universal is making several horror-tinged movies that will debut on its streaming platform, including the Pet Sematary prequel. The cast of The Munsters includes Zombie regulars Jeff Daniel Philips as Herman and Sheri Moon Zombie as Lily. Check out the footage below, which shows Zombie’s colorful–and colorized–take reimagining the classic show.

“For those of you speculating, wondering, and assuming that The Munsters would be dirty, violent, and nast… Well, you are wrong,” Zombie wrote on Instagram earlier this year, to announce the film’s PG rating. “It’s all good down on Mockingbird Lane.”

In addition to Philips and Moon Zombie, Daniel Roebuck will play Grandpa, Richard Brake will play Dr. Henry Augustus Wolfgang, and Sylvester McCoy will play Igor. Rob Zombie announced in 2021 that he has been “chasing” this film project “for 20 years.”

The Munsters premiered in 1964 and focused on the home life of a group of friendly monsters. It ran for 70 episodes over the next two years and was followed by several made-for-TV movies. A sequel show titled The Munsters Today arrived in 1988, which ran for four years.

Tower of Fantasy is perfect for recreating Genshin Impact characters

How many failed NFL coaches does it take to screw up Mac Jones?

“I Will Be Your Congresswoman!” – Gun-Grabbing Congresswoman Val Demings Loses It — Is DESTROYED by Laura Loomer –