Marilyn Monroe’s 1962 “Happy Birthday Mr. President” dress appears to have sustained damage after Kim Kardashian wore it to the Met Gala in May.

On Monday, the pop culture collector Scott Fortner, who oversees a website dedicated to promoting an archive of memorabilia related to Marilyn Monroe, shared multiple images of the nude sequined dress, the back of which appears to have sustained minor tears down the back with some of its crystals lost.

In an Instagram with pictures that appeared to show the dress before and after Kardashian wore it, Fortner described portions of the garment as “literally hanging on by threads.” Fortner said the “after” picture was shared with him by a visitor who saw the dress displayed at Ripley’s Believe it Or Not in Hollywood on June 12. 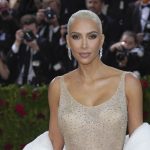 Representatives for Ripley Entertainment, the company that owns the dress, had previously claimed that special care had been taken to make sure that the dress would not tear or be damaged in any other way.

Meanwhile, video footage circulating via social media shows Ripley’s staff members struggling to fit the dress to Kardashian’s body ahead of the gala.

Last month, when the Jean Louis–designed dress was worn by Kardashian, fashion conservators and museum professionals raised concerns. Among the detractors were the dresses’s original designer, Bob Mackie, and curators Sarah Scaturro and Chaédria LaBouvier, who decried the Metropolitan Museum of Art and Vogue for sanctioning the dress’s loan.

Weeks later, the industry group International Council of Museums joined the cohort of critics, issuing a statement condemning Ripley Entertainment for potentially endangering a cultural artifact. “Prevention is better than cure. Wrong treatment will destroy an object forever,” a representative for ICOM said in a statement.

Whether or not the damage to the dress is permanent remains unclear.

“An item like this should be cared for as any other historic item,” Mary Pontillo, a specialist in art-related insurance claims told ARTnews via email, adding that objects like the Monroe dress are treated as “rare or historic” by insurers who deal with damage to cultural objects “exactly as artwork.”

The dress sold at auction in 2016 for $4.8 million to Ripley Entertainment, a for-profit company based in California. At the time, there were no public concerns about the dress being transferred to the new owner and about potential threats to its preservation.

Some experts in the cultural space believe that, even though Ripley’s is not a museum and therefore free of institutional standards of care, the dress should have never been loaned. “It is significant that the dress was worn at all,” Pontillo added.