The weather in Kassel was gorgeous today, and I spent a lot of time taking in Documenta’s abundant outdoor offerings. Many of them involved living plants, including a greenhouse by the Colombian collective Más Arte Más Acción (MAMA), a compost heap by La Intermundial Holobiente, Nhà Sàn Collective’s Vietnamese garden, and mosquito net-based structures by Cinema Caravan and Takashi Kuribayashi.

ruangrupa, the Indonesian collective behind this year’s edition of documenta, writes that they do not conceive of Kassel as an exhibition venue, but rather, an ecosystem. But this mentality not only informs installations in parks—a chatty barista at a documenta-approved coffee cart told me that, to be an on-site vender, they had to sign an agreement with the organization saying they’d source everything locally and ethically. 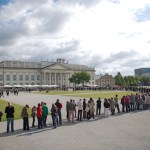 Yesterday, I wrote that the white cube context felt sort of irrelevant to the show. Today, I hardly went in any buildings. I found myself more impressed—and more tired. The day felt something like a scavenger hunt, and to see La Intermundial Holobiente’s compost heap alone, I walked an hour roundtrip.

I was struck by the Nest Collective’s Return to Sender, which featured giant bundles of the e-waste that often ends up on the African continent. Placed prominently in a park, the work didn’t attempt to expose a shocking truth. It didn’t have to, either—we all know we live on a trash planet, and that the effects of this reality are experienced unequally. The work was accompanied by a video in which residents in Nairobi, the city where the Nest Collective is based, discuss their relationship to secondhand clothes, which are abundant in the city and often imported from the Global North. They talked about the challenge of crafting their own unique styles and identities with these materials. The work is indicative of a recent trend in which artists position themselves as figures who might help us wade through the trash and industrial materials we are slowly drowning in.

The success of the outdoor art made plain a familiar claim—that the museum cannot be decolonized, since it is anyway an imperialist invention, designed to show off wares from conquered regions. Better to ignore museums entirely, and dream big when and where you can.

Whenever I saw art acquaintances around Kassel, I asked them if they had any standouts or favorites. Nearly all of them said that the energy and the method was more impressive than any individual work. I agree. Each group that ruangrupa invited was allocated a “collective pot” of money that is separate from their production budget, and they were left to spend it however they pleased. I’ve written before about artists using their proximity to the ultra-rich to redistribute wealth via the art market, but ruangrupa’s project instead plays Robin Hood with the consulate-curatorial complex, or the tradition of some nations like Germany who invest in cultural production, in part for the purpose of fostering cross-cultural understandings and thus good geopolitical relations. Instead of investing in European artists only, institutions in Europe are increasingly handing the reins over to artists from the global South. The results are exciting, and not without their challenges—artists, for instance, still have to serve as “cultural ambassadors,” to quote a recent A.i.A. piece by Simon Wu.

Even a piece by Hito Steyerl involved a fantasy of leaving the art world behind. Steyerl is among the few famous artists included in the show. She recently authored a controversial and concerning letter regarding documenta that was published in Die Zeit, the same German publication that printed false claims related to the quinquennial’s current anti-Semitism controversy, and I have expressed skepticism of her work in the past. But I adored her newest work, Animal Spirits (2022).

She began making the video during the pandemic, and it tells the story of a time that she joined artists Rabih Mroué, James Bridle, and Liam Gillick in auditioning for a reality show called Shepards School. They too wanted to abandon elitist institutions and immerse themselves in nature. Their story is told alongside that of a quantum sheperd-influencer named Nel, as well as that of the show’s producers, who wound up starting an animal-fighting metaverse once their reality show failed. All involved were searching for different ways of leaving society with unlikely blends of new technologies and timeless ways of being. This is epitomized in an installation of AI-generated cave paintings that nods coyly to crypto libertarians. The video is part of an impressive installation concerned with farm-y, folksy ways of being organized by the collective INLAND—Nel and Steyerl are both members. A wall label reveals that 500 cheese coins—some sort of non-crypto, non-currency—are “around. If you happen to find one, congratulations!” It’s hilarious, smart, and absurd, and captures a familiar feeling of confused burnout.

Better Biopsies? High-Speed 3D Cameras Could Be the Future