Italy has established a new museum in Rome dedicated to showcasing more than 200 artifacts that are believed to have been stolen from cultural sites across the country and trafficked in the US.

211 of the artifacts, the majority of the 260 that make up the new museum’s rotating collection, were recovered during seizures led by the Manhattan District Attorney’s Antiquities Trafficking Unit, which estimates the value of the grouping of recovered artifacts to be worth around $10 million.

The newly-minted institution, “Museum of Rescued Art,” is housed in the complex of the National Roman Museum that is home to the ancient city’s 306 C.E. Baths of Diocletian. The 260 artifacts, ranging from Etruscan, Greek and Roman origins, which are still being returned in batches to the Italian government, have gone on display as part of the new enterprise’s first exhibit. Some of the objects were recovered from private collections, museums, and auction houses. 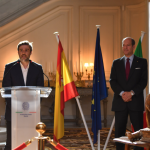 Inaugurating the museum’s Octagonal Hall exhibition space on Wednesday in an official ceremony was Italian Culture Minister Dario Franceschini, Carabinieri commander Teo Luzi, and Massimo Osanna, director of Italy’s state museums. In a press conference, Franceschini described the objects populating the new space as having an “intangible value” linked to Italy’s “historical memory.” Many of them, he said, had never been viewed in public before.

Matthew Bogdanos, the Manhattan assistant district attorney who has since 2017 been in charge of overseeing the department’s cultural property seizures and works closely with the Carabinieri, told ARTnews the New York unit is “humbled that these repatriated antiquities can be on display for the public back in their country of origin.”

Among the more valuable objects on display are votive terracotta heads dating from the 3rd and 4th centuries B.C.E. and a red-figure Apulian vase depicting Eros dated from the mid-4th century B.C.E.. Others on exhibit include statues, urns, plates, and coins dating between 8th to 4th centuries B.C. Many of them derive from areas close to Western-Central Italy that is host to Etruscan heritage sites. The dates at which they were originally looted still unknown by experts.

The Carbineri has been active in art repatriation efforts. Its unit in charge of dealing with antiquities looting cases claims to have recovered an estimated 3 million cultural artifacts since its founding in 1969.

But the Italian police force has in some high profile cases been met with challenges from U.S. institutions. In 2018, an Italian court ruled that the bronze statue of a nude male known as “Victorious Youth” be repatriated by the J. Paul Getty Museum in Los Angeles. The museum challenged the legal ruling on the basis that the artifact was recovered originally in international waters.

“It doesn’t always make sense to exhibit objects in a manner that highlights their removal from and return to the country,” Michael McCullough, a New York-based lawyer who focuses on art restitution cases told ARTnews in an email. Showcasing the recently seized artifacts based on their ownership history alone, he added, may fail to attract longterm audiences. “Not all antiquities removed from Italy were high-quality objects worth looking at.”

Governments in other countries have carried out similar initiatives focused on repatriated artifacts, lobbying for the return of other works from museums abroad in the process. In 2009, Greece established an Athens museum dedicated to showcasing its Parthenon marbles, highlighting the absence of others that had been taken in the 19th century. Nigeria announced plans this year to build an institution in Benin City meant to showcase Benin bronzes looted during an 1897 military raid that are now housed in European and American museums.