Following the opening of Documenta 15 last week, the organizers of this year’s edition of the famed recurring art exhibition in Kassel, Germany, have covered over an artwork that many had labeled anti-Semitic.

The artwork was by the Indonesian collective Taring Padi, and unlike many pieces in this year’s Documenta, it was not a newly made one. Titled People’s Justice (2002), it had first been shown the year it was made at the South Australian Art Festival in Adelaide.

A sprawling banner that meditates on the violence of the Suharto dictatorship in Indonesia, the piece includes images of soldiers who are labeled as members of Mossad, the national intelligence agency of Israel. Some have pigs’ heads for faces, and behind them can be spotted what the German art magazine Monopol identified as “a caricature of a Jew with sidelocks, a cigar, and SS symbols on his hat.” 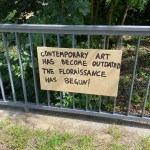 Other works by Taring Padi have attempted to link war and violence in other countries with what has happened Indonesia. In an interview with Art & Market earlier this year, the collective said it has used its prints to evoke “solidarity with Palestine and Myanmar,” among other issues.

“It is not meant to be related in any way to antisemitism,” the collective said of the Documenta banner in a statement on Monday. “We are saddened that details in this banner are understood differently from its original purpose. We apologize for the hurt caused in this context.”

The collective’s statement continued, “Therefore, with great regret, we cover up the work. This work then becomes a monument of mourning for the impossibility of dialogue at this moment. This monument, we hope, will be the starting point for a new dialogue.”

Documenta 15 has been the subject of a bitter debate revolving around whether it was anti-Semitic for its curators, the Indonesian collective ruangrupa, to include a Palestinian collective called the Question of Funding in the exhibition. Ironically, however, Taring Padi had never been a part of that controversy.

The Question of Funding’s participation had spurred some Jewish groups in Germany to denounce Documenta 15. The debate at one point grew so tense that Documenta canceled a planned talks series focused on anti-Semitism, Islamophobia, and related issues. Just before the opening, the Question of Funding’s exhibition space was vandalized with messages that ruangrupa described as “a death threat.”

Both ruangrupa and Documenta have denied the anti-Semitism claims, which have included allegations that the Question of Funding’s members support BDS, or Boycott, Divestment, Sanctions, a pro-Palestine movement that has been controversial within Germany.

Despite there being little factual basis for those claims, they were picked up by some prominent German newspapers, and politicians have even thrown their hat into the debate, with German President Frank-Walter Steinmeier saying at the show’s opening that “there are limits” to artistic freedom.

“As justified as some criticism of Israeli policies, such as the building of settlements, is, recognizing Israeli statehood means recognizing the dignity and security of the modern Jewish community,” Steinmeier said at the opening.

Even those who had risen to Documenta and ruangrupa’s defense amid the claims about the Question of Funding decried the Taring Padi work.

Monopol editor in chief Elke Buhr, one of the few German journalists to take a strong pro-Documenta stance with the anti-Semitism allegations first emerged, published a short article on Monday called “The limit has been crossed here.” “With this [work], Documenta Fifteen weakens its position,” she wrote.

Claudia Roth, Germany’s culture minister, had carefully advocated for “artistic freedom” during the initial anti-Semitism debate. But she did not mince words when, in a tweeted statement on Monday that did not mention Taring Padi by name, she called for the removal of “anti-Semitic imagery” from Documenta, writing, “I’ll say it again: human dignity, protection against anti-Semitism, racism and misanthropy are the foundations of our coexistence and this is where artistic freedom finds its limits.”

The Israeli embassy in Germany echoed Roth’s calls, and went one step further, calling the Taring Padi work “Goebbels-style propaganda,” a reference to Joseph Goebbels who was responsible for much of the racist and anti-Semitic messaging disseminated by the Nazi Party during World War II.

In a statement, Sabine Schorman, the general director of Documenta and the Frediricianum, made an attempt to distance the show from the Taring Padi work.

“The documenta management is not, and should not be, an authority to which artistic exhibits must be submitted for inspection in advance,” Schorman said, adding that the work had not been created for Documenta 15.

“All parties involved regret that feelings were hurt in this way,” she concluded.

Beyond the Controversies, Documenta Is a Remarkable Gathering of Voices

A “Boobs-Eye View” and Other Perspectives on the Body