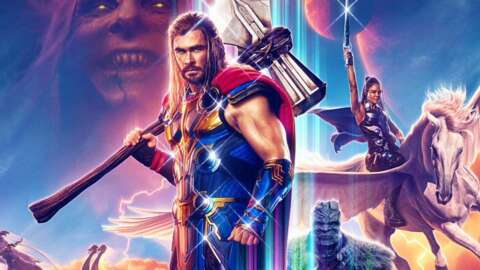 Thor: Love and Thunder is, technically, the fourth installment of the Thor franchise within the MCU–making him the first, and only, core Avenger to have broken the solo trilogy barrier–and let’s be honest Thor 4 is pretty fun to say. It would perhaps be more accurate to call it Thor Ragnarok 2, however, given the return of writer/director Taika Waititi in addition to the cast, continuing his work of course correcting the God of Thunder in both tone and aesthetic. Gone is the Shakespearan fantasy drama, here to say is the ’80s neons, dad rock, and slapstick comedy.

Love and Thunder sees Thor (Chris Hemsworth) in his post-Endgame reality, having left Earth and New Asgard in favor of teaming up with the Guardians of the Galaxy. Naturally, things don’t go smoothly for any of them–and after some time (done in montage, of course) spent galavanting around the cosmos with the Guardians, Thor is forced to break off from the team and deal with a new threat facing god-kind. Gorr, the God Butcher (Christian Bale), an alien with a specific vendetta against any and all deities, has been roaming from planet to planet, killing every god he can find–and this includes Earth, where the Asgardians have settled after their own world was destroyed. These events set in motion a journey for Thor which reunites him with his old flame, Jane Foster (Natalie Portman), the new King of Asgard, Valkyrie (Tessa Thompson), and a handful of other familiar faces along the way.

The good news is that Ragnarok’s tone and look is still completely intact here. Waititi’s distinctive directorial style has not been washed out or papered over–if anything, it is even louder and more bombastic than it was before. The musical stingers (of which there are many) are nostalgic and campy, the jokes (there are lots) are almost all very funny, and the fight scenes hopscotch between looking like something you’d see airbrushed on the side of a van to stylish and extremely well choreographed. The visual effects, too, work extremely well. Unlike most of the MCU’s Phase 4 offerings, Love and Thunder never suffers from cheap looking VFXs or obviously rushed green-screen interactions. The movie looks great from start to finish, and even works in some of the most visually striking moments the MCU has seen in quite some time.

One character also benefits from Waitit’s treatment this time around. Jane, who has been absent from the MCU spotlight since Thor: The Dark World, instantly becomes a more fully drawn participant in the story and Portman’s performance here easily outpaces her work in the first two films. This is the Jane Foster we should have had from the start. She also gets some of the movie’s best gags and has the obvious frontrunner in terms of a fully realized character arc.

Unfortunately, while those positives are all great in and of themselves, they exist within one of the MCU’s weakest and most nonsensical stories overall. The set dressing and the players are all here, and doing their jobs well (extremely well, even, in some cases), but the actual sequence of events they’re moving through is baffling to say the least. The conflict–and by extension, Gorr’s entire existence–actively falls apart as it unfolds. Multiple times, characters are sent off on 10 to 20 minute time-sinks that circle aimlessly around random set pieces and MacGuffins that ultimately go nowhere. The MCU is certainly no stranger to logic problems forcing stories to fall apart under scrutiny after the fact, but Love and Thunder’s plot never even manages to get itself off the ground before it starts to unravel.

And speaking of Gorr–while Bale certainly does get a handful of very cool-looking fight scenes and powers, he also seems to oscillate randomly between Pennywise-like cartoon character and two-bit villain. His schemes never materialize into anything meaningful and any and all opportunities to engage with the bigger themes his character presents–the idea that all gods are selfish and faith in higher powers is meaningless–are flat out ignored in favor of baffling last minute decisions and random nonsense monologues. The end result is just another incredibly forgettable MCU bad guy, which is disappointing to say the least.

This problem persists not just in Gorr, but in Thor and Valkyrie as well. There’s a running gag with Stormbreaker being “jealous” that Thor wants Mjolnir back–it never materializes into anything, despite Stormbreaker remaining important at multiple junctures in various overlapping schemes. Another extended sequence sees the team petitioning Zeus (Russel Crowe) for help, only to be met with a handful of jokes and baffling exposition that results in yet another weapon being put into play. But this weapon doesn’t actually do or mean anything, unlike Stormbreaker, and it’s never made clear why it was needed in the first place, other than to give an excuse for Crowe to do a funny accent for a while.

The end result of these non sequiturs and disparate ideas makes Love and Thunder feel less like a movie and more like a scrapbook of random ideas, cut up in between some neat looking music videos. Some of those ideas are great–Jane, the humor, the visuals–while others are lackluster and meaningless. It just never really comes together into a cohesive thing, which ultimately makes the whole experience ring hollow at best and confusing at worst. But, hey, at least it’s not The Dark World.

Ethereum Dives 15%, Why Close Below $2K Is The Key