Sri Lanka’s new president said that securing an IMF loan would take until at least September after weeks of protests and political turmoil sparked by the country’s economic crisis.

Ranil Wickremesinghe, who took over as president this month after protesters forced his predecessor Gotabaya Rajapaksa to flee the country, said in a speech that finalising the negotiations would take longer than anticipated.

“I was aiming for July to reach an agreement and to get the IMF board approval by first week of August,” Wickremesinghe, who previously served as prime minister, said.

“Since the incidents [earlier in July] all these will now be delayed. It will take until the end of August. Only in September that we will be able to get approval.”

Wickremesinghe had previously said he wanted a deal as early as June. Sri Lanka has been hit by weeks of unrest amid widespread fury towards the government, whose economic mismanagement the protesters blame for pushing the country into its worst economic crisis in decades.

Sri Lanka defaulted on its foreign debt of more than $50bn in May, the first Asia-Pacific country to do so in more than two decades, after effectively running out of foreign reserves. The lack of foreign currency for imports has triggered crippling shortages of everything from fuel to medicine, leading to a collapse in living standards.

The country started negotiations with the IMF this year for a $3bn bailout, and is also in talks with other lenders including the Asian Development Bank and countries such as India and China for more financial aid.

Analysts said that the government would probably need to pursue a package of painful economic reforms before finalising an IMF deal.

Fitch Ratings said that while the government had a large parliamentary majority to help pass such reforms, they risked triggering more public opposition.

“In the absence of an IMF deal, we expect Sri Lanka to face a very strained external position in the near term,” Fitch said in a note. “The country has little foreign exchange to pay even for essential imports such as fuel, food and medicines.” 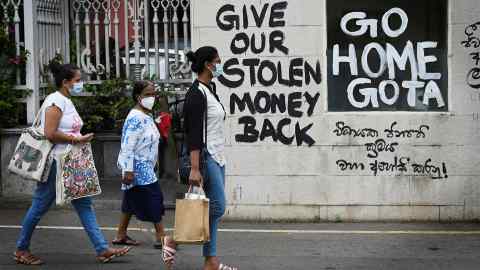 Sri Lanka has become an extreme example of the pressures facing many developing countries after the global surge in fuel and food prices following Russia’s invasion of Ukraine, which exacerbated the financial strain caused by the Covid-19 pandemic.

Several of Sri Lanka’s neighbours are also feeling the strain. Pakistan this month agreed a preliminary deal for a more than $1bn disbursement from the IMF to top up its own foreign currency reserves. And Bangladesh this week approached the IMF to begin talks over a multibillion-dollar loan.

Economists said that Sri Lanka’s woes were also self-inflicted, the result of economic mismanagement and spending on white elephant infrastructure projects under the Rajapaksa family, which ruled the country for the better part of two decades.

Many protesters also want Wickremesinghe to quit. Shortly after taking office, baton-wielding police cleared a big protest site in Colombo in a show of force under the new president.