Glencore and other global trading groups have stopped supplying Chinese metals merchant Huludao Ruisheng after $500mn worth of copper went missing in a scandal that threatens to squeeze commodity financing in the country.

Glencore and Geneva-based IXM have stopped supplying the Hebei-based group, according to people familiar with the matter. Glencore had also transferred some of its existing metal stocks from the port city of Qinhuangdao to alternatives such as Qingdao in an effort to avoid similar problems, added a trader.

The case has put the spotlight on the financial health and corporate governance of commodity traders in China, the world’s largest metals consumer.

“It’s not the first time we’ve had the problem with material going missing in China,” said Colin Hamilton, managing director of commodities research at BMO Capital Markets. “Onshore financing in China for any foreign bank or trading house will become harder.”

A total of 13 Chinese trading companies — 12 of which are state-owned — have a total claim on 300,000 tonnes of Huludao Ruisheng’s copper concentrate worth about Rmb5bn ($740mn).

But only one-third of that was in the warehouses, said the trader involved. The Chinese companies are bracing for potential losses as high as Rmb3.3bn ($490mn) and dispatched a team to the city of Qinhuangdao last week to investigate the situation and determine subsequent legal action.

Several onshore and foreign traders said the exposure of western companies to the Huludao Ruisheng scandal was limited. Some of those traders said the Chinese state-owned enterprises acting as letter of credit agents for Huludao Ruisheng — which include Jiangxi Copper International Trading, Zhuhai Huafa Group and Wanxiang Resources — are likely to have suffered the brunt of the losses.

“Glencore had letters of credit in place on some cargoes” that were bound for Huludao Ruisheng, said a person with direct knowledge of the matter, explaining that Glencore had hedging arrangements in place to mitigate losses. “But if you have the ability to divert cargo then it’s less of an issue.”

Huludao Ruisheng, together with its sister company Ningbo Hesheng International Trading, sold copper concentrate to multiple buyers because of a severe liquidity crunch, according to a Chinese-based trader.

The medium-sized trading company purchases between 800,000 and 1mn tonnes of imported copper concentrate a year for distribution to domestic Chinese smelters.

The alleged mishandling of the copper trades by Huludao Ruisheng is not the first metals financing scandal in China. In 2014, Citigroup and Mercuria, one of the world’s biggest commodities traders, went to court over a $270mn financing agreement on metal-backed lending deals in north-east China.

Chinese authorities are also investigating the repeated pledge of aluminium stocks as collateral for loans in Guangdong province. 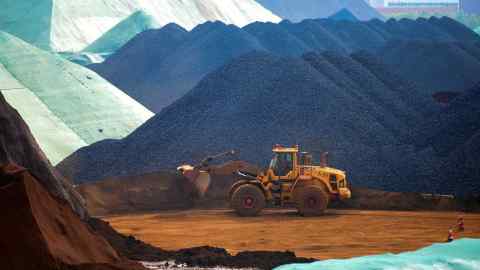 Hongyuan Hengyi, a unit of middle-sized Chinese brokerage Shenwan Hongyuan Securities, has sued Foshan CICC ST Source Warehouse Management after it failed to collect 4,125 tonnes of aluminium stockpile from the warehouse, according to a June stock exchange filing. Hongyuan Hengyi is seeking compensation of up to Rmb85.6mn.

Foshan has not publicly contested the litigation so far. The Shanghai Futures Exchange disqualified it as a designated delivery warehouse in late June.

Several trading sources said the string of incidents could shake the willingness of western banks to extend financing for commodity trading activity in China.

“It’s not great,” said one trading source. “You don’t want these kinds of things. It begs questions from the banks to be answered.”

“The bigger problem is western banks and whether their appetite for further financing takes a hit,” said another trader. He added that the fallout would have been worse if the banks were taking heavy losses as they did when $800mn of hidden losses at Singapore’s Hin Leong Trading led to the collapse of the company in 2020.

Hamilton said the scandals could trigger a push for consolidation of China’s trading industry, much as Beijing is moving to create a centralised iron ore buyer.

“Regulations are not there in terms of protection from these sorts of losses,” he said. “It doesn’t build confidence in the Chinese system.”