10 Memes That Perfectly Sum Up Starlight As A Character 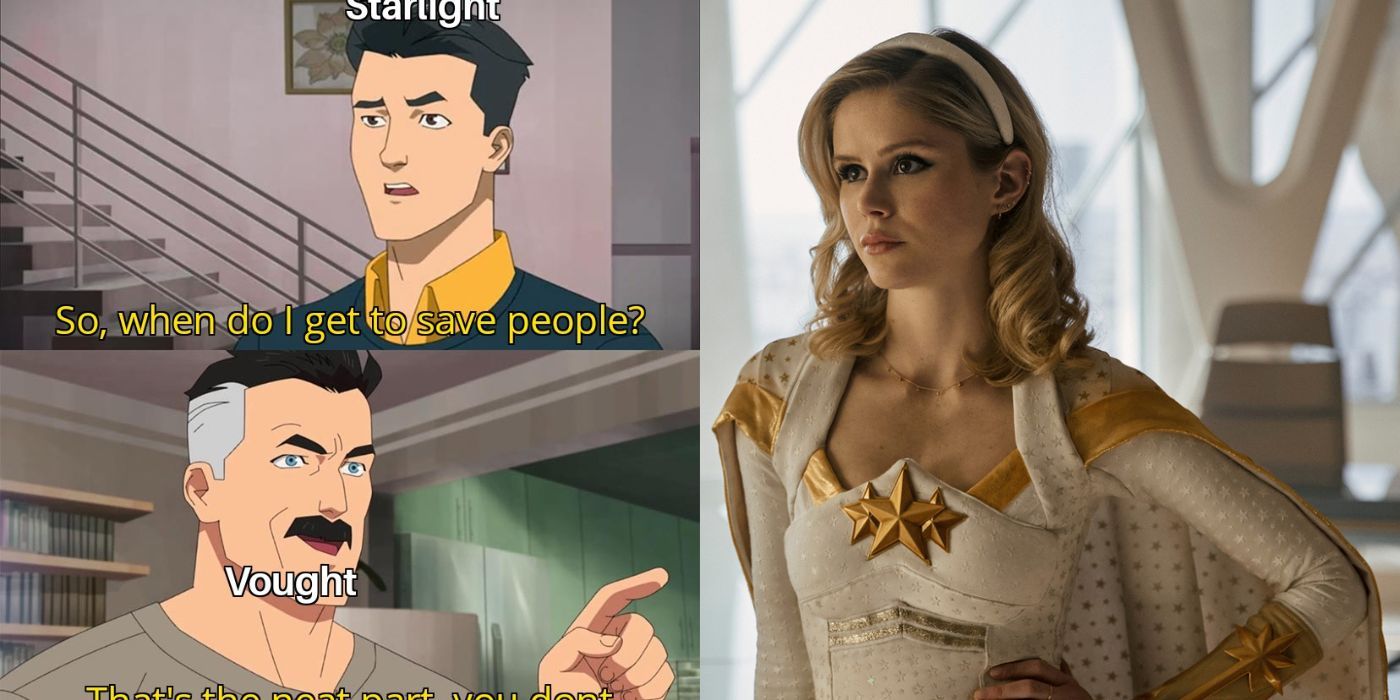 After the recent conclusion of the third season of The Boys, fans are more than ready to see the next season on screens. While it isn’t likely that the season will be available for at least another year, Gen V, the show’s spin-off, will likely air sometime in 2023. Of course, the show won’t have the characters that many fans have come to love.

So it will likely be a long while before fans get to see Hughie or Starlight gracing audiences again. That doesn’t mean that fans intend to sit idle. Many have been preparing memes that reflect on the show’s history and characters. Some of those memes have captured the essence of key characters, like Starlight, perfectly.

10 Ready For A Spark

Much like Homelander flashes red eyes each time he needs to intimidate, Starlight has developed a similar habit through the years. Whenever she needs to threaten her enemies, the lights around her start to flicker while her eyes glow a bright golden hue.

Of course, she isn’t entirely like Homelander. After all, she uses her powers to serve as one of Homelander’s greatest enemies, which means she’s automatically a better person than the malevolent supe. Still, it’s hard to deny that she’s picked up one of his habits in a pretty terrifying showing.

Starlight joined the Seven fully expecting to finally have the chance to serve as a hero in the big leagues. Instead of pageant shows, she could star in heroic operations against criminals and supervillains around the world and even save people from natural disasters and plane crashes.

Of course, it hasn’t really gone the way Starlight expected. The supes are rarely actual heroes and instead just participate in movies, commercials, and public events to boost their own popularity and that of Vought’s. While it was a harsh realization for Starlight, it was one she needed to learn fast.

Butcher is a brutal figure, and one of the saddest things about Butcher is that he’s desperate to kill every supe — no matter if they’re a good supe or not. While he can sometimes temporarily align with them, he’ll never really like them. That has been pretty unfortunate for Starlight, a supe and a major ally of the Boys.

While it’s been expressed through Butcher arguing with Starlight, threatening her, and outright shooting her, the two are often forced to work together if they want to take down Homelander. But, no matter how much she needs him, it certainly rakes on Starlight that she has to work with an anti-hero like Billy Butcher.

While not every supe is a good guy, they can sometimes find their interests aligned when the moment is right. When facing off against a Nazi like Stormfront, the gloves are off, and the few good supes don’t mind getting their hands dirty to take part in knocking her down a peg.

One of Starlight’s best moments came when she joined up with Queen Maeve and Kimiko to beat Stormfront relentlessly. While she often loathes resorting to fighting like that, Stormfront certainly deserved it, and Starlight proved she was as good a fighter as she is a public face for the Boys.

Part of Starlight’s disillusionment with the Seven came after Vought requested that she put on a revealing costume that she didn’t really want to wear. As a model for young girls, Starlight wanted to dress the way she did prior to joining the Seven, but Vought immediately refused her.

It’s why many fans prefer when Starlight is dressed as a civilian, passing through the world without anyone even realizing she’s a supe. Considering that Starlight was forced into the spotlight from a young age and faced many problems because of it, it is nice to get to see her dress the way she actually wanted to, rather than the way a company forced her to.

5 Not The Most Effective

While Starlight has some impressive-looking powers, she hasn’t actually made too much of a difference in the show powers-wise. Unfortunately, she isn’t able to do anything as wild with her powers as other supes can. Set against figures like Homelander and Soldier Boy, there’s just not much Starlight can contribute.

Luckily, her influence over the public is even more useful than her powers could be even if she was on Homelander’s level. For most of the show’s run, it’s been all that keeps her safe from Homelander’s wrath and Vought’s prosecution. Still, against non-supes, her powers are still pretty helpful.

While Starlight is incredibly famous, she doesn’t get recognized very often when she isn’t wearing a costume. In many scenes, when she needs to be undercover, she just dresses in casual clothes and no one on the street even recognizes that she’s a supe at all.

Given how many supes refuse to ever dress in normal clothes, such as Homelander and the Deep, it makes sense that non-supes wouldn’t think of anyone among them as a supe. Of course, given the supposed rise of supervillains in the second season, it’s somewhat unbelievable that no one even looks.

As the chief supe of the Boys when Kimiko is chasing down one supe or another, Starlight is often their sole line of defense from the Seven and other supposed heroes. Unfortunately, in order to establish stakes or a villain’s firepower, Starlight is often knocked out or just thrown out of a fight entirely.

It’s made Starlight seem considerably weaker than she should really be, but it also led to a touching subplot in the third season, where Hughie tries to protect Starlight from other supes. Of course, Starlight doesn’t need protection and, as one of the bravest characters in The Boys, she didn’t want it either.

2 Not A Fan Of Powered Hughie

That conflict with Hughie came to a head in the third season when Hughie started taking Temp V to develop powers of his own. With the V, he manages to teleport at will, giving him the ability to actually help Starlight in a fight. Of course, Starlight wasn’t happy with that either.

Though she didn’t particularly hate that Hughie could teleport, she hated that he felt the need to do it to keep her safe. Considering how dangerous Temp V is after multiple doses, it was an even poorer decision, which just furthered their conflict. It showed that Starlight had a good head on her shoulders and a boyfriend who’d made some pretty bad decisions.

Despite the fact that Homelander can’t stand Starlight, thanks to her association with the Boys, Starlight managed to catch Vought by surprise. Even as their star supe grows more and more uncompromising, Starlight’s public persona has caught the love of the people.

Though Vought wants nothing more than to send Starlight away in a casket, she’s survived their numerous attempts and managed to come out on top each time. From the first season to the third, she’s proven that she will not go down quietly, and it’s just meant that she’s gained power at every step.

Next: 10 Memes That Perfectly Sum Up Hughie From The Boys As A Character

See How You Could Lose Weight Snacking on Sweets