Two protestors from the Italian climate activism organization Ultima Generazione glued themselves to a sculpture held in the Vatican Thursday, according to a press release by the organization.

At approximately 10:30 am, two protestors — a 26-year-old woman referred to only as Laura and an unnamed older man — along with several reporters, entered the Vatican Museums where the activists glued themselves to the base of the sculpture, Laocoön and His Sons. Shortly after entering, that section of the museum was evacuated and the two activists stripped of their phones, which the release cited as concerning because video documentation is often used to ensure protests proceed without undue abuses. 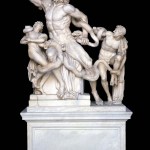 “Laura,” according to the release,  recently graduated with a Master’s degree in Art History and said that she was prompted to protest because she felt her future, both personally and professionally, had been robbed by government officials who have continued to ignore the climate crisis. She explained that the statue she and the other activist chose spoke to this reality.

The sculpture, Laocoön and His Sons, depicts Laocoön, a key figure in the myth of the war of Troy. A Trojan priest, Laocoön advised his fellow Trojans to set fire to the Trojan horse that had been sent from the Greeks as a gift which, in reality, hid a band of enemy soldiers. In the myth, Athena punishes him for his continued efforts to undermine the Greeks’ plans and sends a serpent to strangle him and his two sons.

“The alarm signal went unheard, the ambassador of danger and his children died crushed in the silence of unconsciousness and the entire city of Troy was set on fire, causing the death of many naive but innocent people,” Laura said in the release.

“As witnesses of a crisis ignored for decades, we have chosen to draw attention to our message by drawing close to the figure of Laocoon, the seer who suffered extreme repression for having tried to warn his fellow citizens of an impending catastrophe,” said an unnamed Ultima Generazione activist in the release. “There will be no open museums, no art, no beauty in a world plagued by the climate and ecological emergency. Drought, floods, fires, pollution and scarcity of resources will take over if radical choices are not made in this regard.”

The statue is one of the Vatican’s most valuable artworks. It was discovered in 1506 and identified to be the masterpiece referred to by Pliny the Elder in his writings. After its discovery, it was bought by Pope Julius II and made the centerpiece of the Vatican’s sculpture garden. It was thought to have been made around 40-30 B.C.E.

The Observer reported earlier in August that both Just Stop Oil and Ultima Generazione have received $1 million in funding from the California-based Climate Emergency Fund. The money is used exclusively to provide legal aid to activists from these organizations, CEF executive director Margaret Klein Salamon told the publication.