The women claimed that König had inappropriately touched them and made sexual comments to them. One woman alleged that König had forcibly kissed her. Some of the allegations concerned König’s behavior in settings like a restaurant and nightclubs several years ago.

König had previously denied the accusations, some of which were made by women who were not named by Die Zeit, but he had only done so in the form of a short statement provided by his gallery.

In the longer statement released Friday, König said that he had “a dissolute and impulsive way of partying, dancing, and talking” during the years in question and that his partial blindness “may have led to women or even men feeling harassed by me, or my actions even perceived as assaultive.” 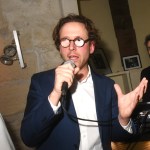 He said he planned to take legal action as a result of the report, which he described as “defamation.”

Some of the women’s allegations date back several years, and according to Die Zeit, there was at one point a criminal complaint lodged against König. The complaint was dropped because it was made anonymously, the report said. König said that he was unaware of any such complaint and that, on the contrary, he had filed a complaint against “unknown persons” who had written an unreleased letter about his alleged misconduct that was cited in the Die Zeit report.

The dealer, who runs a Berlin-based gallery that has spaces in Seoul and Vienna, is one of the foremost figures of the German art scene. This week, his gallery participated in the Frieze Seoul fair, which opened days after the Die Zeit report published. Multiple sources told ARTnews that König himself did not attend the fair.

The ZEIT’s reporting is false and misleading, I am shocked. With the suggestive question in their headline, old rumours are repeated, and new ones are spread without proof.

What this article has triggered will not go away, but after many conversations with family and friends I have decided to defend myself by speaking out publicly and, of course, legally. I will take action against this defamation. However, I am sure that even if I am successful legally, the damage will remain.

Thursday afternoon last week I was contacted for the first time by The ZEIT, at noon the following day I already received a questionnaire of more than 5000 characters with a deadline of this Tuesday, 10 o’clock. After a conversation I offered to have with two of the three The ZEIT authors of the article on Tuesday, this was abruptly ended by the authors allegedly because of other appointment commitments, without me being able to elaborate on my points; I had the impression that the article was already written. Witnesses, facts, and information apparently did not interest The ZEIT. For the release of my alleged quotations, I was granted only a good hour following this  conversation, so in the end I did not get even a word in their article. It is incomprehensible to me that the authors of The ZEIT article quote from the letter of my lawyer but omit an essential piece of information: that there is a legal dispute between one of the persons involved and myself.

The cited conversation with another author of The ZEIT article, Carolin Würfel, took place at the beginning of 2018 as one among friends at a private birthday party in a small circle, that is, contrary to The ZEIT’s portrayal, not in a professional setting. However, I am happy to face the public debate, also gladly in the form of a continuation of the originally private conversation with Carolin Würfel.

Former employees of the gallery stated to us that they had been contacted in recent years by Luisa Hommerich, one of the authors of the article, with “suggestive questions” and queries about “gossip”. I tried several times during this period to reach Luisa Hommerich to address the questions, including through one of her The ZEIT colleagues – there was no response.

The author was doing research at the time based on an anonymous letter. Although The ZEIT was not allowed by law to quote from this anonymous letter, and although the public prosecutor’s office was investigating the author, The ZEIT used this as their lead story. ​

The ZEIT also writes that there was a criminal complaint against me. This is not true. I do not know of any criminal charges and therefore cannot comment on such an accusation. What is true is that at the time I filed a criminal complaint against unknown persons in order to take action against the anonymous letter despite knowing that this action would also mean that I would also be investigated on the basis of the content alleged therein. The investigations remained fruitless and were therefore discontinued.

All of the alleged behaviour that I am accused of in The ZEIT article took place, according to the article, exclusively during nightlife five years ago. The incidents definitely did not take place in the form described. In retrospect, however, I can imagine that my dissolute and impulsive way of partying, dancing, and talking, the combination of party or nightclub atmosphere, crowded rooms, alcohol, darkness, my poor vision (since an accident in my childhood, my right eye is blind, and I see only 20-30% in my left eye), may have led to women or even men feeling harassed by me, or my actions even perceived as assaultive. I cannot reconstruct this in concrete terms, but it seems at least possible to me. What I do know for sure, however, is that I never acted intentionally in these moments, never kissed someone against their will, never disrespected a rejection, never did not take “no” for an answer. At no time did I cross that line.

Should I have come too close to someone through my behaviour in the form described, I am disturbed to learn this, and I deeply regret it and I would like to apologize in all forms.