Do Ho Suh Reconstructs the Visual Language of Memorialization – ARTnews.com

Sheer panels of fabric suspended in the air delineate larger volumes. The edges of things—doors, windows, columns, bricks, grilles—are thick with seams. These hovering masses are the precise shape and size of particular houses, structures usually stabilized by gravity. But here, in the most recognized works of Do Ho Suh, the interiors are empty, the homes like renderings set in real space.

Context partly explains the absence: Suh grew up in Seoul in the 1960s and ’70s, in a traditional home without fixed interior divisions—as represented in Seoul Home/Seoul Home/Kanazawa Home/Beijing Home/Pohang Home/Gwangju Home, 2012. Yet negative space, a long-standing sculptural concern, fulfills several other important functions in Suh’s work. It invites viewers in, allowing them to inhabit a space by looking up from below or walking through the open corridors of his floor-based architectural fragments. It points to the narrative of displacement—in Suh’s case voluntary, from Korea to the United States in 1991, to study at the Rhode Island School of Design and, later, Yale University—that often threads through conversations about the artist’s practice. And it encourages consideration of what would usually be present: How would this space be occupied and divided? What other architectural elements would these walls support? What kind of foundation would make this structure possible? 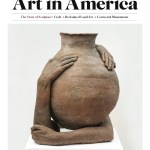 This last line of inquiry leads to Suh’s current project, ScaledBehaviour_drawing(InvertedMonument_1.28.1)-B (2022), a machine-rendered drawing of a composite of three 3D scans of actual figurative monuments, where the suited male figure has been flipped so that the head points downward into the base and aligns with the ground beneath the pedestal. The drawing, included in this issue as a print, is the basis for the sculpture Inverted Monument (2022), fabricated in a plastic filament, on view in Suh’s current exhibition at Lehmann Maupin gallery in New York. The surfaces of the hollow three-dimensional translation resemble a network of blood vessels or matted hair, emphasizing the odd bodily presence of the unnamed figure.

Suh is interested in how the ubiquitous pedestal conditions expectations for what it will support. “It’s a bit like writing a sentence,” he explained in an interview. “You have a subject and verb and so forth. Often, we ignore the importance of conjunctions. But if you pay attention to those conjunctions, you can extract the meaning of the sentence. I think that pedestals work as an either/or structure. They impose it onto us and we don’t really question it.”

The artist’s questions are in dialogue with a history of challenges to the supposed neutrality of the gallery and its methods of display. Brian O’Doherty, in his landmark 1970s series of essays “Inside the White Cube,” recounts how the pedestal “melted away” in the 20th century. The floor became the pedestal and the gallery itself became a “zero space” in heightened contrast to the outside world.

Suh’s ideas, however, pertain more to the pedestal as it still functions, solidly, in that outside world of public space. Some of his earliest, lesser-known works sought to destabilize the persistent support structure. Early cartoonish sketches related to his “fabric architecture” works depicted boxy houses atop running legs. That motif is also tied to Public Figures, his 1998 commission from the Public Art Fund in New York, in which a hulking stone pedestal devoid of a subject appears, on closer inspection, to be supported by hundreds of tiny bronze figures standing underneath it with their arms raised above their heads. In his initial designs, Suh included a mechanism that would allow him to push the whole configuration a few inches across the Brooklyn Commons every evening. For safety reasons, that plan never materialized, but more than 20 years later, Suh is returning to the problem of how to draw attention to this particular object and rethink its function.

During the Black Lives Matter protests and ensuing debates about monuments to controversial and harmful figures, Suh researched the monuments in his own city of London—where he moved around 2009—and found that, of nearly 1,000 statues named in one study, the vast majority were dedicated to white men, from kings to Columbus, many of whom were shown in similar poses. He was interested less in the specifics of each figure than in the visual vocabulary of memorialization and how history is stylized. Passing by these figures every day, he notes, residents become accustomed to the celebration of these men—they no longer “see” them—and they may also overlook the absence of other figures.

These problematics of the monument are, by now, widely acknowledged, but less agreed upon is what to do with the works: topple, deface, destroy, move, or preserve them? Melt them down to create new monuments? Suh is resistant to the idea of placing monuments in museums, as those structures too are products of colonialism, and to put a once-revered figure in the museum would only be an act of perpetuation. Nor does he seem interested in continuing to use the pedestal as a mechanism of support for alternate figures. His response—abstract, invert, empty—is humorous in the same way as his sketch of a runaway house. Here is the shell of a man, swallowed up by a disintegrating foundation.

Reese Witherspoon’s Draper James Sale: Last Day to Save Up to 63%