As of September 1, at least 2,000 asylum seekers from Central and South America have arrived in New York City from Texas, courtesy of that state’s governor, Greg Abbott. New York’s social service system is straining to properly accommodate their basic needs, from housing to healthcare to food. While this humanitarian crisis, as New York City Mayor Eric Adams has called it, shows little sign of improving, members of the art community have rallied to collect aid.

Artists Guadalupe Maravilla and Mariana Parisca have set up a GoFundMe page calling for donations of funds, foods, and toiletries, to be delivered to the Lutheran Church of the Good Shepherd in Brooklyn. Meanwhile Maravilla’s gallery, PPOW in Tribeca, is acting as a drop-off site for donated goods, from prepaid subway passes to clothes and old cell phones, between September 15 and September 17. Donations can also be made through a link on the gallery’s website. 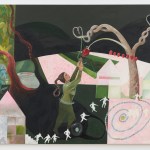 Since April, Abbott has been forcefully transporting asylum seekers to various sanctuary cities across the city as part of his billion-dollar border initiative Operation Lone Star, announced last year. The controversial plan has seen a harsh crackdown on crossings at the U.S.-Mexico border, and more than 100,000 people from Central and South America have been bussed, first to D.C., and later New York and Chicago.

Civil rights and immigrant rights groups have criticized the operation—which Abbott’s website describes as an attempt to “stop the smuggling of drugs, weapons and people into Texas, and prevent, detect and interdict transnational criminal behavior between ports of entry”—as punitive and rife with human rights abuses. In July, the Texas Tribune, working with ProPublica, reported that the Department of Justice had launched an investigation into alleged civil rights violations under the operation.

“Texas Governor is using asylum seekers as political pawns against sanctuary cities,” the artists’ GoFundMe page reads. “They are now arriving in New York City, where shelters are already overwhelmed. Hundreds of families are being sent from Texas without food, water, medical care, or hygiene supplies for a 45-hour bus drive.”

Parisca and Maravilla, who arrived from El Salvador to New York as a refugee in the 1980s, are working with Reverend Juan Carlos Ruiz, who leads the Lutheran Church of the Good Shepherd in Brooklyn. Ruiz is well-known advocate for undocumented immigrants—his church headed a range of pandemic relief efforts to support them—and he cofounded the New Sanctuary Movement, a faith-based coalition of clergy, lawyers, and activists who provide social services to those at risk of deportation.

“The work we are doing at the church as volunteers with zero resources is to welcome them and give them warm meals and care that they need,” Maravilla told the Art Newspaper. “The church is not structured to hold large amounts of people; the toilets and stove have broken down twice. We have been making repairs and improvising from donations we raised. We don’t have beds, pillows or blankets. The food is being prepared by volunteers. We need an overnight security guard among many other things.”

PPOW became involved after its leadership learned from Maravilla about the efforts undertaken by Ruiz.

“Working closely with Guadalupe, I’ve witnessed firsthand the impact his practice has within the undocumented community,” the gallery’s associate director, Ella Blanchon, told ARTnews. “That community is being targeted right now and it feels more urgent than ever to activate our network to support those who do not have the means to support themselves. I’ve been amazed at the outpouring of support and hope we’ll see similar initiatives emerge from this.”