New York City mourned when famed rock club CBGB closed in 2006. The legendary home of rock and roll, punk, and dance, CBGB was where Johnny Rotten went to cope with the breakup of the Sex Pistols and where the Police and Patti Smith began their careers, often singing for a mostly empty club. When the space was taken over by men’s clothing brand John Varvatos two years later, many New Yorkers saw it as emblematic of the endless gentrification of the East Village.

Art gallery Spazio Amanatia will soon open at 313 Bowery in a reinvention its founders hope will bring the famed venue to its roots. CBGB’s space was originally home to art gallery 313 Gallery. Spazio Amanita, which already has a space in Florence, is inaugurating the New York space with “Place Holder” featuring works by emerging Italian painter Leonardo Meoni opening on September 29. 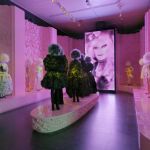 Amanita is the brain child of two art world heirs: Caio Twombly, grandson of Cy Twombly, and Tommaso Rositani Suckert, whose great-uncle, Curzio Malaparte, was a leading Italian artist, writer, and filmmmaker who became a war correspondant and diplomat during World War II.

“I came to here to become a lawyer, but America brainwashed me to become an entrepreneur,” Rositani Suckert told ARTnews over coffee this week.

Rositani Suckert’s father, a major intellectual property lawyer, had hoped his son would follow in his footsteps. But, like so many children of successful parents, he was exposed early to the arts and went down another path. His family is the caretaker of Casa Malaparte, a house designed by Adalberto Libera for Curzio Malaparte. Rositani recalls summers spent at Malaparte, surrounded by artists, and translators. He was doomed from the beginning, he said. When he came to the US, he made fast friends with Twombly, who also grew up in Italy and was deeply embedded in the New York art scene.

“He brought me to studio visits with him and so I started becoming passionate about this,” said Rositani Suckert. “Naturally our roles became a little bit more explicit and I became more interested in the art world but from a business background.”

Rositani and Twombly inaugurated Spazio Amanita in Florence in March of 2021, on the second floor of the famous Odeon Theater, just a stones throw from Palazzo Strozzi. Rositani Suckert and Twombly saw Spazio Amanita as a way to invest in emerging Italian and international artists in a city that typically values more established and classical artists. So far, Amanita has shown artists such as Jenny Saville, Robert Nava, Oscar Hou Yi, and Adrian Schachter, son of artist and journalist Kenny Schachter and a close friend of Twombly’s.

“Florence is the heart of the Renaissance, but at the same time, it’s not very contemporary,” said Rositani Suckert. “There’s a lot of museum activity but not many galleries. We thought it would be very cool to have young artists from around the world exhibiting in this city full of history.”

At the same time, the two began the Iris Residency program in Cy Twombly’s atelier in Bassano, a sprawling palace that holds Twombly’s Greek and Roman sculpture collection and, now, works from artists Amanita has worked with — though which works or artists, Amanita would not specify.

The inaugural resident, Leonardo Meoni, will have his New York debut at Amanita. Meoni has been at work with unique velvet canvases. By pushing the fibers with his fingers, hardware tools, rakes, and brushes, he evokes subtle illustrations of monuments that have disappeared, were destroyed, or removed around the world, from Bas reliefs carved into the walls of Ancient Baylonia to the Robert E. Lee statue in Charlottesville that was removed after the deadly “Unite the Right” rally in 2017. The works are incredible reactive, shifting based on lighting and perspective.

Though the Florence space was a successful way to kickstart Amanita, the founders said, the need to expand to New York became evident as they began working with more artists.

“We have a growing roster of artists with growing needs,” Jacob Hyman, who came on as Head of Sales and Exhibitions, and is also a partner, told ARTnews. Hyman left a sales position at Gagosian to join Amanita, craving, he said, closer contact with artists.

“Having a large base in New York is a pretty special opportunity to offer artists, particularly younger ones, so we decided to take on the challenge and the risk of doing this,” he said, while giving a tour of the space alongside Garret Goldsmith, Head of Operations and partner at Amanita.

The space is large, offering 3,500 square feet of exhibition space, which includes two studio spaces in the basement that artists can use. CBGB fans have flocked to 313 Bowery as they realized that the space was being reinvented as an art gallery.

“The former manager of the Ramones came in the other day and was just like, ‘Thank you for doing this!’” said Goldsmith. The founder of the late ’70s music rag Punk Magazine has also been hanging around the space and a corner of the notoriously dirty CBGB bathroom remains intact. “We’re learning new things about the history all the time,” he said.

Hyman, meanwhile, is happy to note that the space, though under construction for the past month, has already become a meeting place for artists and the art community and hopes it will remain a way to build community. He believes Amanita is uniquely able to do this due to the horizontal partnership structure between Twombly, Rositani Sucket, Goldsmith, and himself.

“We’re not a mononym-based gallery, there’s no name on the front door. I think that has given us that ability to look past ourselves and have a spread out partnership structure that really fosters collaboration,” said Hyman.